York99 wrote:Very specifically, what will you do to ease traffic in Austin; what is your timeline for each step; why can I trust that you have what it takes to get it done; and will you commit to a public apology and resignation upon the failure of accomplishing those goals?

Traffic and the tremendous number of homeless people have been basically my only issues with the city since moving to Austin.

Remembering that the Mayor is just one vote amongst seven, I would still hope for a grander vision from our leaders - one that speaks to Austin's place amongst peer cities nationally and internationally, a vision that inspires its citizens to collaborate to overcome larger challenges and work independently to accomplish bigger achievements. That's me, though.

To your issues, let me at least mention with what is in the works for each starting with the homeless situation. The State of Texas underfunds its social services and mental health facilities and while I don't know where Austin and Travis County stand relative to other cities/counties on funding, conventional wisdom tells us that it doesn't close the gap left by the State.

So...what is being done about it? In March of last year City Council made a sea-change decision that went little noticed outside of the social service community. Namely, it was a directive to use affordable housing funding mechanisms to tackle 30%MFI (poverty level) housing instead of 80% (low-income working families, generally small infill projects in parts of town with good schools). Stick with me, here. MFI or Median family income in Austin is $73,800 so 30% or below is roughly $15,500 or below to qualify. What it means in practice is that the city will be following best practices nationally which stress 'housing first', providing shelter and then helping with addictions, employment, counseling, etc... It's also sometimes called 'wet housing' but in official documents you'll see it called 'PSH' or 'Permanent Supportive Housing'. It is believed that focusing on this need will begin to take people off the streets and into the care that they need or help them to support themselves. What has proven more difficult, not surprisingly, is finding parts of the city willing to accept low-income housing of this variety. It has not been easy, and won't ever be easy in the future - either because of vocal neighbor objections or other legal restrictions on public land (a large facility was planned for land the city owns by the airport, but it was purchased with Federal Aviation dollars that specifically prohibited new residential there). You get the idea. Anyway - support the affordable housing item the next time it comes up on a bond election.

Now...traffic. Where to begin...it's a big topic and I'm no master at this subject, either. I will, however, share some thoughts in response to the usual arguments around this issue. They concern
• how this is measured,
• who owns the roads you probably think are problems,
• the difference between congestion and mobility,
• and finally some possible solutions, including some being discussed for Austin.

First – you may have heard 'Austin has the worst traffic in the country' or some similar title. We did supposedly have the worst traffic of any mid-sized city in America, then we went over the hump in classification so we are now a large city and well back in the pack relative to other urban areas in that group. That aside, the metric is fairly flawed for a couple of reasons that under-report and some that overstate the root cause of people’s frustration.

This ratio inevitably gives "better" scores to cities where normal uncongested travel times are pretty long -- in other words, sprawled-out cities. Here’s how a city with long transit times and few alternative mobility options scores against a city that has a shorter time and better transit opportunities:

What the implications are for Austin, a town where people still think nothing of living in Pflugerville or Cedar Park and driving to Oak Hill every day or vice versa, is that those long commutes mask, on paper, a commute time frustration that’s probably worse than reported by these metrics/rankings. But going back to the above issue of total time vs. relative time….I think (my opinion only) the issue that most people are upset about is the total time, not the differential between peak and off-peak hours. There may be some irrational consumer psychology at play but I think most people recognize that the majority of the time spent in their car concerns the distance traveled and not the delay (see pie charts above). To that extent, the solution is to live and work closer together – not always as easy as it sounds, I realize – but I know no shortage of people who buy houses in far off places like Buda and Kyle and then complain about the traffic at the I-35/71 interchange. I don’t want to say I’m deaf to those complaints, but I’m less sympathetic.

Second response…and I’m going to speed things up here…is that most of the pinch points in the city are TXDOT roads, not City of Austin. You undoubtedly have heard about the state’s budget woes, but even if things were going swimmingly, revenue falls short of covering the on-going maintenance of our existing roads let alone expanding them. Some of this is due to the fact that the gas tax hasn’t been touched since 1991, it’s a fixed 20 cents a gallon rather than a % rate so it hasn’t kept up with inflation, and lastly because of improving fuel efficiencies, interestingly enough, which allows for more miles driven and wear on the roads per gallon consumed. The result is that contrary to most complaints about transit, roads are also very subsidized. There are certainly things that the city of Austin can do to partner with the state, but contrary to the intuitive response, expanding capacity rarely reduces congestion (car traffic, like a gas, expands to the volume of the space given). For a list of the most congested roadways in Texas, you can look here: http://apps.dot.state.tx.us/apps/rider56/ (I-35 from 71 to 183 is number 4, Lamar from 6th street to 45th is 24)

Beyond this, there is perhaps a more theoretical debate that asks if congestion is a bad thing or if it is the natural state of a city. Less in dispute is that there is a genuine difference between congestion and mobility and that public transit, bike lanes, etc… seek to address the latter and get chastised for not solving the former. It’s unwise to promise a solution to congestion by funding transit but that’s what is done over and over again because it plays well as a message. When Cap Metro couldn’t get their 2000 light rail plan approved, they went for a cheap commuter rail plan (the current Red Line) and had a massive PR push that essentially boiled down to ‘support this to get other people off the road and your commute will be easier’. It’s wrong on a lot of levels, but that’s what people want to hear and even then many people wouldn’t vote for transit. What funding transit (especially dedicated rail) does do is it gives mobility options that can reduce the impact of congestion on your individual commute if you choose to use it, it gives opportunity to participate in economic life for those who cannot afford a car and it spurs efficient and dense nodes of development along fixed lines that otherwise might not occur. These are the reasons that the city of Austin is looking at building an urban rail.

If you want to actually fix congestion of roads alone…you won’t like the answer…but the general response in traffic engineering practice is congestion pricing for use of those roads. I hear no shortage of vitriol regarding toll roads from even the most free-market of libertarians…so I’m thinking it’s a non-starter for most. Even Janette Sadik-Khan, Bloomberg’s transportation director in NYC, couldn’t get that through in Manhattan so I doubt you'll see anything like that here soon.

Miggy wrote:I would still hope for a grander vision from our leaders - one that speaks to Austin's place amongst peer cities nationally and internationally, a vision that inspires its citizens to collaborate to overcome larger challenges and work independently to accomplish bigger achievements.

Indeed. I hear you. I love your passion and I'm looking forward to eventually voting for you.

I'm pretty ignorant of Austin local politics, but it seems to me that this grander vision might be what's hurting Austin right now. This massive influx of people is watering down the "weird" part of Austin, which is the biggest draw for a lot of people, not to mention the steep property tax hikes that hurt local businesses and bring in national chains and restaurants owned by huge, faceless restaurant groups PLUS all the additional traffic that is not being dealt with.

I'm certainly not anti-growth, but it seems to me Austin's growth is not as responsible to its citizens as it could be. A grand vision is great, but not if it hurts the quality of life for the people who are living here.

Also, whoever is in charge of timing traffic lights should be punched in the throat.
"Every cat dies 9 times, but every cat does not truly live 9 lives."
-Bravecat

Much more to the point.
"Every cat dies 9 times, but every cat does not truly live 9 lives."
-Bravecat

York99 wrote:Also, whoever is in charge of timing traffic lights should be punched in the throat. 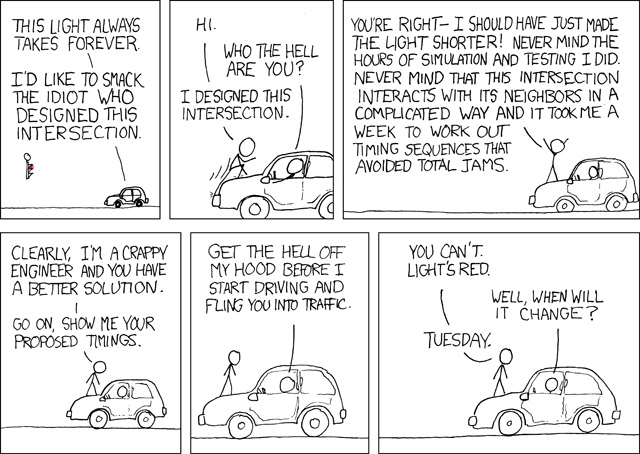 Luck has a way of rewarding those who do not depend on it.
-- Robert Guillaume
Top

Fixed the graphic above.


York99 wrote: This massive influx of people is watering down the "weird" part of Austin, which is the biggest draw for a lot of people, not to mention the steep property tax hikes that hurt local businesses and bring in national chains and restaurants owned by huge, faceless restaurant groups PLUS all the additional traffic that is not being dealt with.

I'm certainly not anti-growth, but it seems to me Austin's growth is not as responsible to its citizens as it could be. A grand vision is great, but not if it hurts the quality of life for the people who are living here.

I'm with ya, brother. I don't think we do as good as we could at integrating newcomers into Austin and baking a bigger pie, so to speak. Certainly there is new energy being added every day and the University is a big part of that, but I think we fail miserably especially on the outskirts of town. It's a real opportunity if you add more people interested in patronizing local businesses, contributing to the local creative scene, innovating in the local tech industry, etc... Some of that is the tone set at the top.
Last edited by Miggy on June 21st, 2011, 11:42 am, edited 1 time in total.
Top

Much more to the point.

Much more to the point.

Just give it time. You'll come around. We're patient.

[Although, I fear for your success as a politician. You're too thoughtful and you don't seem to be a sexual deviant.]
"Every cat dies 9 times, but every cat does not truly live 9 lives."
-Bravecat

Return to “Politics and Religion and Stuff Like That”